Encyclopedia of ocean liners - Insight behind the scenes

As a result of twenty years of research and digital reconstruction activities, Dr. Tamás Balogh - Tom - created the world's first digital ocean liner collection, which contains of about 1 000 digital blueprints of about 600 ocean-going passenger ships from the period between 1830 and 2003. This is not only the only collection of its kind in the world, but also the largest and most accurate collection (with virtually all ocean liners built or planned during this period) based on original shipyard blueprints and models. It is the Encyclopedia of ocean liners which offers a multi-threaded connection to maritime history outreach, written and visual storytelling - by researching the history of ships and their wrecks, publishing books, articles, studies, and by applied and artistic graphics and by supporting film production. What is this exactly and who is behind it? Be an insider!

I.) About the author:

Dr. Tamás Balogh is a professional lawyer on International Law and Law of the European Union, on social security law and on monument protection and cultural heritage law. He is a shipwreck researcher, maritime history writer, graphic artist, and translator.

2000-2005: He was the representative social security sector in the delegation negotiating of the bilateral social security agreements signed by Hungary. In 2004 he was a member of the sectoral expert group carrying out legal harmonization activities related to EU accession. He received an award from the Minister of Health for his work.

2005-2013: He was the head of the EU development policy in the health sector, the leading member of the expert group responsible for the planning, EU negotiation and domestic implementation of the HUF 351 billion EU-supported health development program between 2007-2013, and expert in cooperation of cross-border health care.

2014-2018: He prepared the legislation announcing the management plan for the cultural World Heritage sites of Hungary (Hollókő, Tokaj, Pannonhalma, Pécs).

2016-2017: He was the Hungarian delegate of the UNESCO board supervising the implementation of the international convention on the protection of underwater cultural heritage.

2019-2022: He was the leader of the Legal Directorate of the Budapest University of Technology and Economics.

2022- : He is the Chancellor's Commissioner for International and Development Affairs at the Budapest University of Technology and Economics.

2014:, At the initiative of the Hungarian Limes Association, together with Dr. Árpád Karsai – the vice-president of the Association of Tourist Advisors – he made the preliminary plan of the National Limes Cultural Tourism Development Concept, i.e. a coherent cultural and heritage tourism offer connecting the ancient Roman and other attractions along the Hungarian section of the Danube with each other and with the natural heritage of the Danube. More information here and here.

2014-2018: He was a walking guide of Beyond Budapest, a company that organizes thematic city walks, for which he developed a walk that explores the rich nautical heritage of the Hungarian capital, situated on the banks of the Danube River.

2007- : He has been the president of the Hungarian Society of Maritime History, Modeling and Tradition.

2017-2020: He was the head of the Scientific Committee of the Hungarian Diving Association.

2017-2021: He was member of the Scientific Committee of the International Association of Underwater Activities (CMAS).

2018: The Minister of Defense of Hungary recognized his edutainment work on naval and maritime history by awarding him the highest honor that can be awarded to civilians, the First Grade of the Distinguished Title for National Defense.

In his spare time, Tom translates literature of maritime history and marine inspired poems of Anglo-Saxon poets into Hungarian (the latter published by the Hungarian Litera-Túra Magazin: 1., 2., 3., 4., 5., 6.).

II.) A profession evoced by the maritime history

As a maritime historian and wreck expert Balogh Tamás (Tom) became captivated by Titanic after seeing the artwork of Willy Stöwer Sinking of the Titanic and he bacame committed for a life to the collection and dissemination of knowledge of maritime history and underwater exploration. Tom is the president of the Hungarian Association of the Maritime History, Modelling and Tadition, and a member of R.M.S. Titanic Hungarian Research Group, he has 20 years of expertise in underwater exploration, in addition to a solid background in history, museums, and outreach through media, film, and publications. Tom is known as a respected, passionate expert who’s prime directive is helping keep maritime history alive and accessible to everyone.

He took part in the exploration of 16 shipwrecks as a historical and technical expert on Hungarian and international diving expeditions for the research of sunken ships. By finding and processing of archival documentary and images, by planning and analysing of on-site surveys, by exploratory description of the wrecks and wrecksites, and by the preparation of reconstruction drawings, he is active participant of the explorations: in the Adriatic Sea (in case of 6 shipwrecks of the former Austro-Hungarian Navy), in the North Sea (in case of 7 shipwrecks of the Jutland battle), and in the Atlantic (in case of 3 wrecks of the World War I), which included 1 dreadnought-type battleship, 4 battlecruisers, 5 cruisers, 1 destroyer, 1 torpedo boat, 2 submarines and 2 ocean liners. Learn more about his blog posts related to the wreck-diving here.

Storyteller: In addition to wreck research, he helps in various ways continue to advance the discipline and bring more history alive for scholars and the public alike.

1) He is the author of several Hungarian and English language maritime history works - independent volumes (8), articles (56) and blog posts (405). His articles published in the Hungarian permutation of the BBC History (10), and the National Geographic Magazine (7) and on the magazine's website (25). Tom’s recent book titles include:

a) In the shadow of the Titanic (in Hungarian) about Dr. Árpád Lengyel (the Hungarian doctor, who was in charge on board of the Carpathia during the rescue of Titanic survivors) together the doctor's granddaughter, published in 2012;

b) Dutch TITANIC – history of the s.s. STATENDAM about the biggest ocean liner ever built for the Netherlands published in 2018 and launched exactly on the day of the centenary of the ship’s sinking in Belfast, in the former headquarter-building of the Harland & Wolff Shipyard (here are some sample pages from the Hungarian version of the book);

His next job is the "Liners - great pictorial encyclopedia of giant steamships" featuring the history of ocean-going passenger steamers from 1838 to 2003. More info - synopsis, some sample pages, an interview and a report - here.

2) He is the director, writer and graphic designer of the Association's 22 exhibitions (4 permanent 18 temporary).

3) During his 20-year career, he has been privileged to host the popular international documentary series the Secrets of the Lost Liners (2022), and Shipwreck Secrets (2019), furthermore the Hungarian miniseries Shipwrecks of the Monarch’s Fleet (2004) and numerous Hungarian documentaries as specialist responsible for historical & engineering analysis, technical drawing & he is a regular participant in the edutainment programs of Hungarian television- and radio channels. 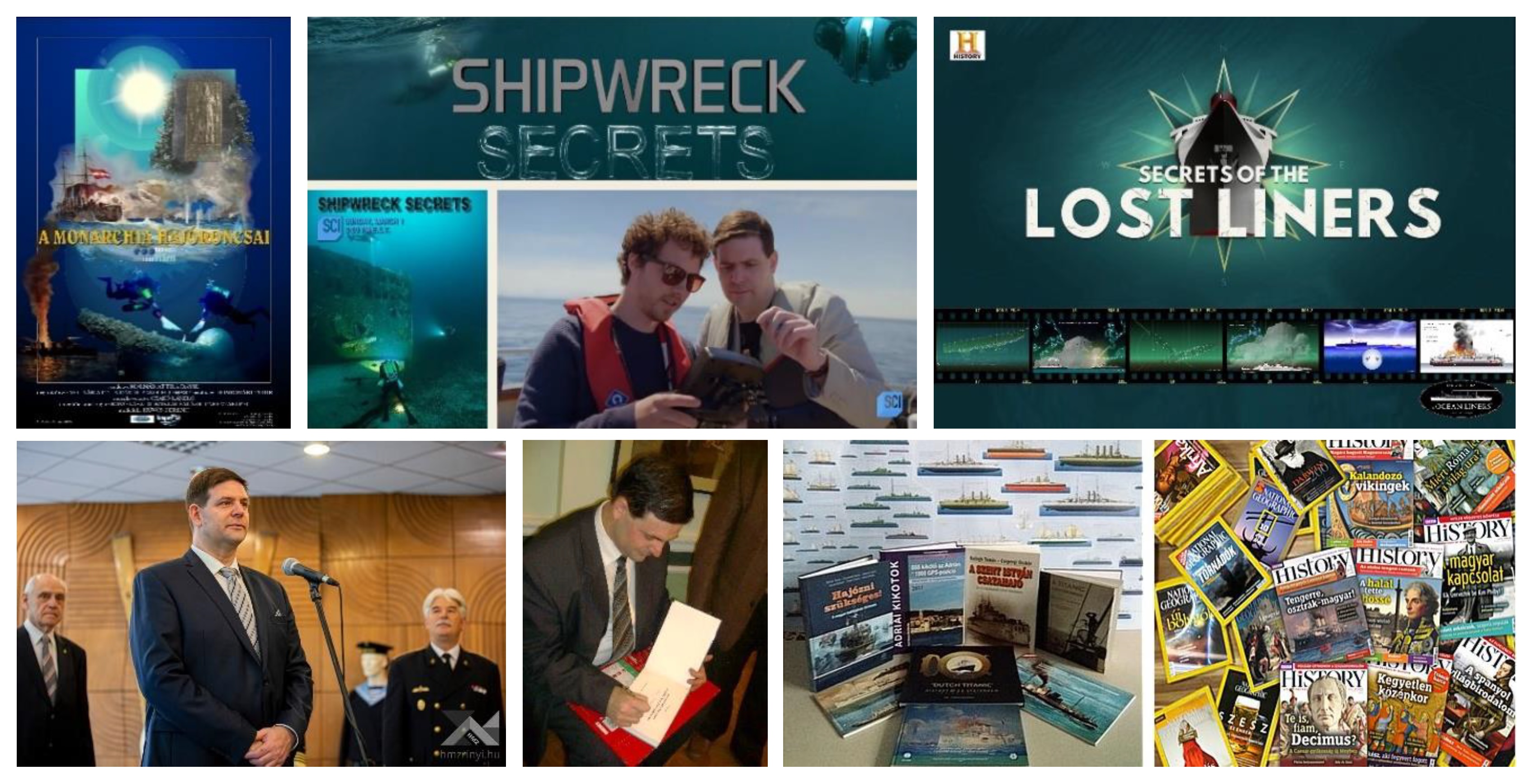 Tom – using by cutting edge digital imageing technologies – creates the world's largest and most accurate digital collection of ocean liners and developes provision of services (design, construction, film post-production), that are suitable for the extensive use of the collection, both in filmindustry (commercials, documentary, cinema), both in public display (exhibitions, museum pedagogy).

Until the advent of civil aviation, the only means of transportation between continents on the surface of our planet covered with seas was provided by ships. Of these, high-capacity, fast and most seaworthy ocean-going passenger ships are also of paramount importance, as they were a vital means of communication overseas in times of peace and war. In addition, the most industrially developed nations considered an ocean-going passenger ship built with outstanding expenditure as a floating ambassador for their country, a “product expo” praising the service capacity of national industry, and a measure of technical value, so these ships became national symbols. In view of all this, the history of ocean liners was closely intertwined with the history of mankind, in which these ships sometimes played a decisive role.

As a result of twenty years of research and digital reconstruction, Tom created the world's first comprehensive collection of digital ocean liner profile drawings, which contains 1,000 digital profiles from 1830 to 2003 for 600 ocean liner passenger ships from 100 shipping companies in about 20 countries. It is not just the only such collection in the world, but also the largest and most accurate collection (with the most of all that ocean liners which completed or planned during this period) based on original shipyard blueprints and builder’s models.

The purpose of the project is the production of ocean liner profile-drawings processed in various ways and designs about historic ocean liners of the 19th and 20th century, to visually illustrate the history of ocean liners, with the help of high-quality - accurate and detailed - blueprints, which are the reminiscents of the simplified and coloured versions of contemporary shipyard blueprints, general arrangement plans and cutaway diagrams, made for representational purposes.

In the project will also be published a series of profile drawings in a kind of type-book, supplemented with a professional ship biography, and also presenting all the ship’s conversion variants as well. The production of posters (eg thematic billboards showing the evolution of ocean liners, the ocean liners of different shipping companies, or the 14 fourstackers, etc.) is also part of the project. These posters and blueprits can be ordered. 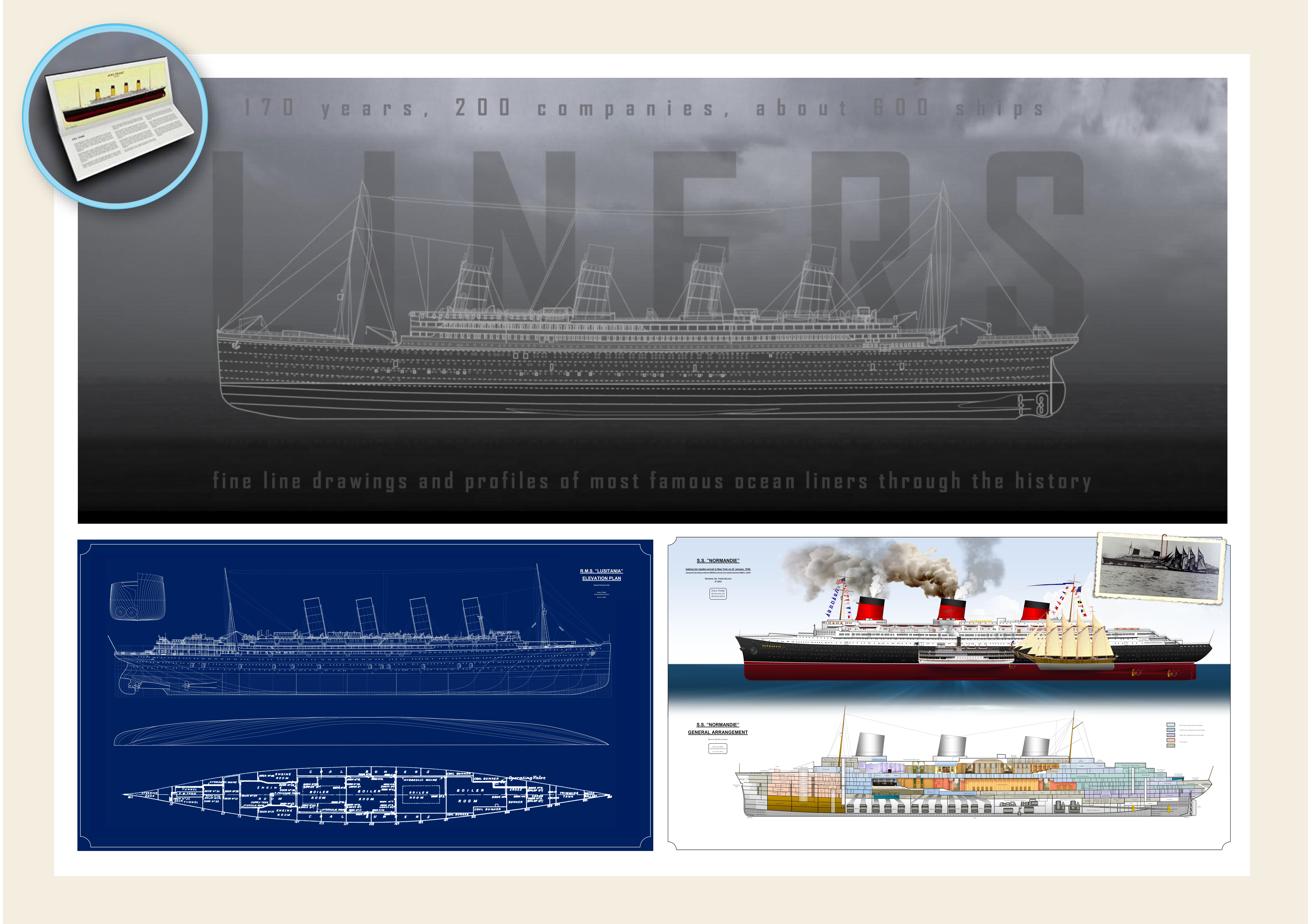 The project also aims to offer a service for international film industry with benefits (saving production time and costs) by various 2D animations (1., 2., 3., 4., 5., 6.) and/or 3D ocean liner-models, that can be easily and quickly used in film production as a pre-fabricated element or asets, in the market for feature films, documentaries and commercials, but even in the market for interactive museum animations. The production of post-production, including 3D animations, is typically the biggest item in the film production budget, and the mass availability of uniformly high-quality, yet accurate and authentic representations reduces these costs. 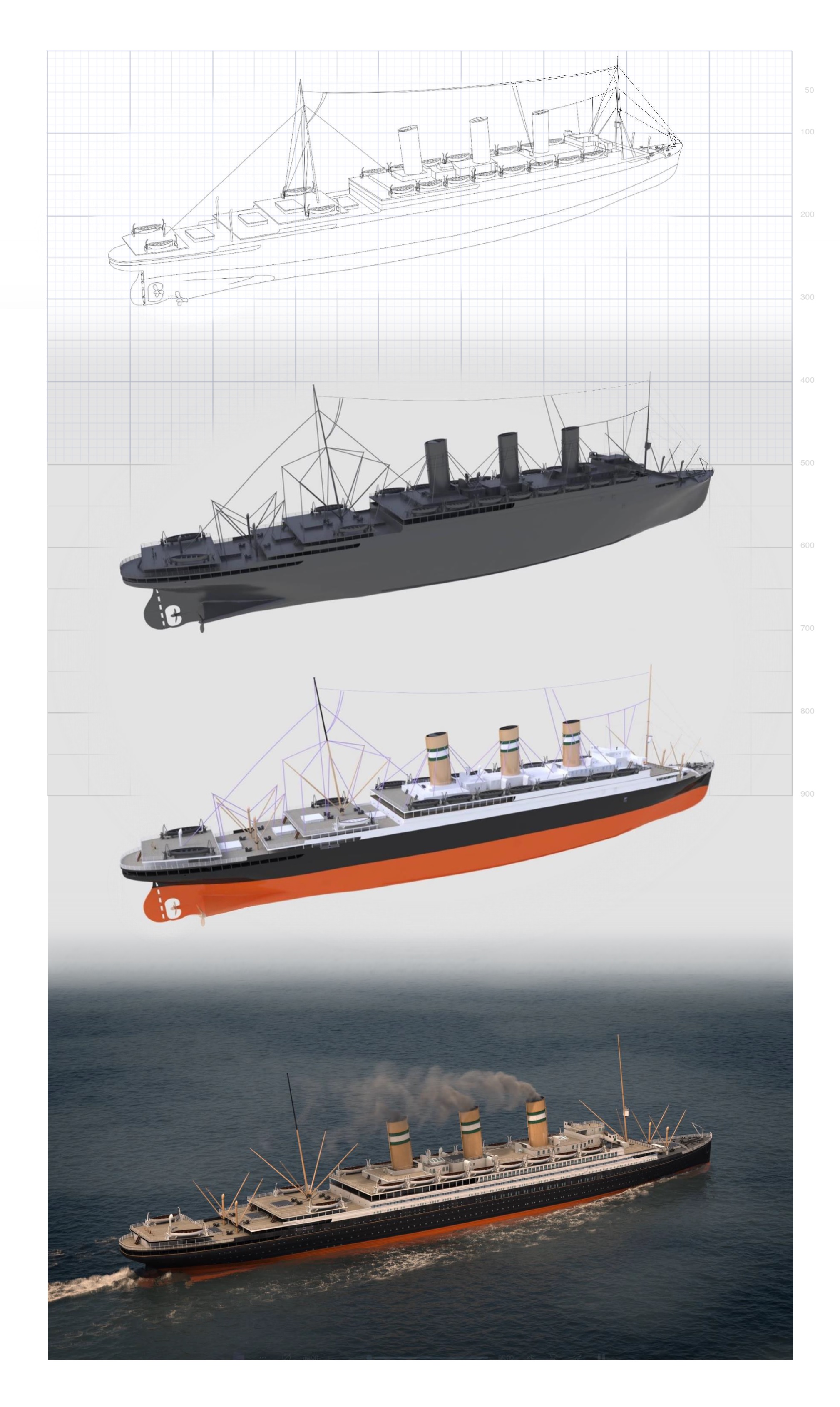 This service has some potencial benefits as follows:

1) Today's trends in documentary filmmaking confirm that the millennial generation, which makes up a significant proportion of the documentary consumer community, focuses primarily on documentaries that, in addition to a strong narrative, offer an authentic appearance.

2) There are many documentary filmmakers who work with technology and budgets optimalized for making the currently popular micro- and short-documentaries (with mixed quality animations - ordered from stock or created by different teams on a mixed platform - or not use animations at all). However, this production technology cannot guarantee the authenticity of point 1).

3) In comparison, the offered service guarantees a uniform appearance for all ships (for example in entire series). As part of the service, 500 ocean liners are available processed in the same quality (by clicking on the link above, you can access the pdfs that contain the catalog of ocean liners currently available and could be selected for 3D model and animation). Thus, in productions, not only one, but virtually any ocean liner can be displayed relatively quickly in the desired quality (it is currently the largest such collection in the world). And beyond that, of course, Tom is able to make a similar display of any other historic ship (sailing- or steamship, merchant vessel or a warship). Depending on the budget, the production can be combined with a variety of 3D and 2D display options.

4) This avoids the quality risk of buying from stock, the disadvantages of lack of uniformity in multi-team animation. Tom's service guarantees a high-quality uniform look for entire series.

5) All ships in the service can be displayed even in headlines. And the service is also capable of allowing to make spectacular comparisons of the ships (for exemple in various episodes of a certain series). 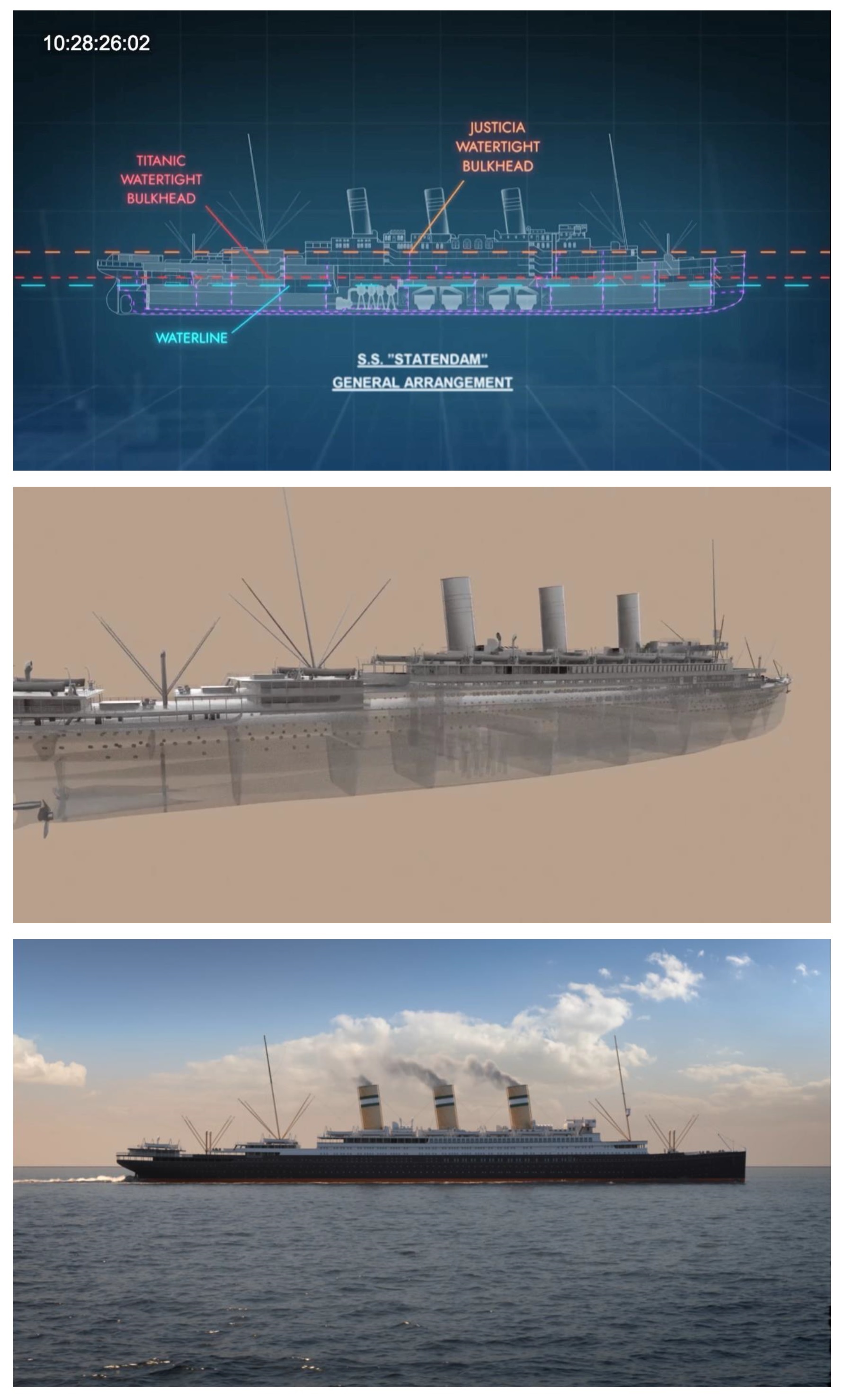